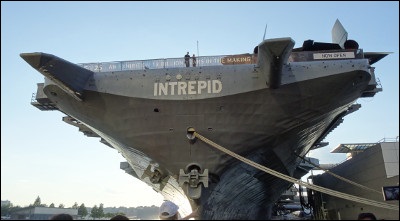 The Intrepid Sea, Air and Space Museum has so many cool things to do and see, that we highly recommend it, especially if you have kids interested in space exploration.

Besides the regular exhibits, there are always special events, lectures and stargazing nights that are sure to make any "space geek" (both young and old) excited beyond words.

With all the exhibits, tours other features at the Intrepid, you can literally spend hours taking it all in. Here are a few examples of what you can see and do at the Sea, Air and Space Museum:

The Intrepid is the 4th Navy vessel of that name and was first launched in launched on April 26, 1943. She participated in several major World War II battles and post WWII Mercury Astronaut rescue missions and Soviet submarine surveillance.