Irreverent, gritty and beautifully stylized, Chicago is one of Bob Fosse's best choreographed musicals, and the currently adaptation running on Broadway, which follows his dance style closely, would surely make him proud.

You might think that having seen the film based on this work would make seeing the show on Broadway redundant (in other words, you've been there and one that). But seeing a live performance in the intimate space of a Broadway Theatre adds to the experience making it unique, enthralling and fun.

Chicago is not a family friendly show. It contains very adult themes, adultery, murder and there's even a hanging. Take the kids to see Lion King and reserve this one for an adult's night out.

During this recent trip to see Chicago (my fourth) Rumer Willis, Dancing With The Stars champion and the daughter of Bruce Willis and Demi Moore, played Roxy Hart and as expected, her dancing was phenomenal.

The entire cast performed wonderfully and the live orchestra provided a richness to the score that you miss out on watching the film.

It is true, Chicago has been on Broadway for a while, it's now in its 19th year, but time has not diminished this truly wonderful show and I recommend it whether it's your first Broadway experience or your fortieth. 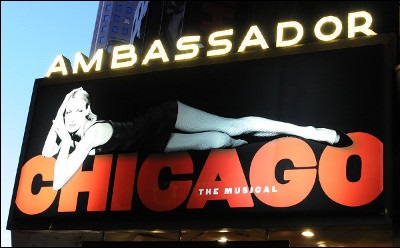 NOTE: The seats in the Mezzanine are on the skimpy side and so is the leg room. If you need space for long legs, aim to get tickets for aisle seats.