I hate to use an old worn out cliche, but Hamilton was like a breath of fresh air blown onto Broadway. Lin-Manuel Miranda, the composure and lyricist of , wrote the book, music and lyrics for this fabulously inventive show that's a musical biography of Alexander Hamilton, one of the Founding Father's of this great nation. In my opinion he created a masterpiece.

When I first heard the concept for Hamilton I was completely confused by the subject matter (who really cares) and totally skeptical that it would be anything but a snore. "Is this going to be like 'School House Rock' where they sung about Columbus sailing the ocean blue?", I wondered. I couldn't have been more wrong.

By the end of the rousing opening number I was hooked, and by the end of the first act I was making a mental list of all the people I would invite when I came to see it again. Its funny, its exciting and I found myself getting misty eyed at the end. All of the actors are top notch, and the staging and choreography is masterfully done.

Though the subject matter is not really appropriate for young children, this play is something that today's youth will really enjoy. A combination of Rap and poignant vocals are skillfully used to tell an interesting story that made me go home and voluntarily read more about Alexander Hamilton's life, something no history teacher I've had has ever been able to do.

Besides doing the heavy lifting of creating the show, Lin-Manuel Miranda also takes on the lead roll of Alexander Hamilton several times a week. I saw it during a matinee with Javier Munoz as Hamilton. I can't imagine anyone doing it any better, so you won't be disappointed if Mr. Miranda is not in the lead when you see it.

I highly recommend this show and I'll be rooting for it at Tony time. 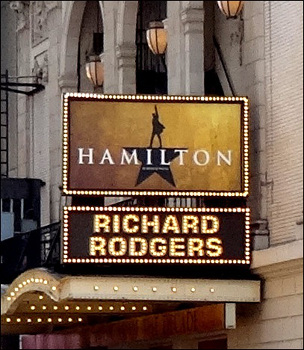 NOTE: The steps in this theatre are very steep. Bad for high heels, good for seeing the stage from the cheap seats.