The Sex and the City Tour

Sex and The City was a ground breaking comedy that explored the lives of four smart, sexy and single professional women as they search for love in the fast paced, high fashioned City of New York. 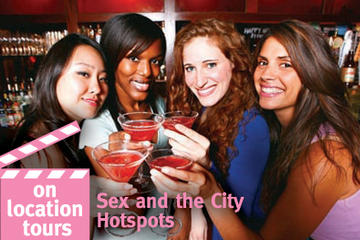 Since the program was based in New York City, each week viewers were treated to a glimps of some of the most trendy spots that Manhattan has to offer and the Sex and The City Tour lets you follow in Carrie and the girl's footsteps.

What's On the Tour:

This is a 3.5 hour guided bus tour that will take you to more than 40 New York City locations featured in the famous TV series so you can conquer New York City and drink where the girls drank, shop where they shopped, and gossip where they spent a lot of time gossiping.

Don't be like Carrie. Wear some really good walking shoes.

Bring cash. You can get Cosmos at O'Neal's, but you have to pay for them.

At the Sex and The City offical website, you can watch episodes if you're an HBO subscriber.

Sex and the City Trivia

Sex and the City aired on HBO from June 1998 to February 2004. It was created by Darren Star and starred Sarah Jessica Parker, Kim Cattrall, Christin Davis, Cynthia Nixon, Chris Noth and a host of other fantastic actors. This highly acclaimed program was nominated for more than 50 Emmy Awards and 24 Golden Globe Awards.

Rumor has it that Sex and the City 3 may be in the works!